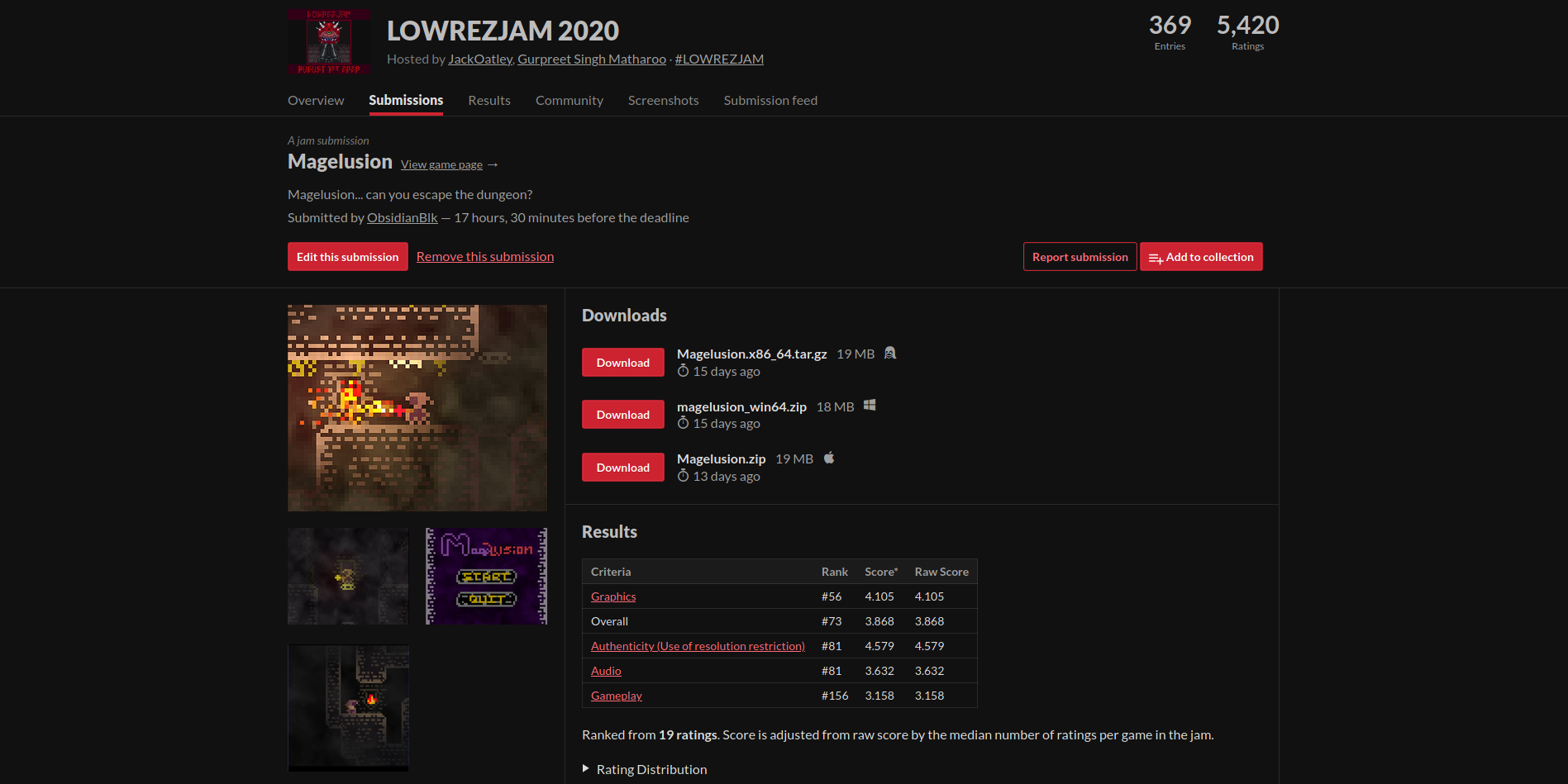 So, The Jam has Ended

It’s now been two weeks since I finished Magelusion for the LOWREZJAM 2020, and one week since all submissions were rated and scored. Ultimately, I don’t think I did too badly. I ended up with an overall placement of 73 out of 369, which puts me in the top twenty percent of entries. Given the quality of many of the entries I’ve played or seen played, I feel mostly very happy with that position!

I have to admit, I’m not overly happy with the Gameplay score… which is a 3.158. It’s not a horrible score, but it is a positional score of 153. Based on the feedback I’ve received about the game, I think the core reason may be because of the in-game dialog.

I admit it’s a little start heavy and I over use “…” (which, if you haven’t noticed in my blog posts, I happen to use “…” a lot. It’s part of my style, for better or worse). It’s tough, though. I wanted the dialog to give play instructions and some in-game hints, but I didn’t want the dialog to be bland. I wanted to give a little bit of a personality behind the dialog, and, as such, a story to the game. But, I heard a couple times a comment similar to “It’s be nice to play* the game”*.

It’s a funny balancing act… trying to convery story and control scheme in a very limited window space (64x64 pixels, remember) and not usurping the players time. There was a way to skip whole dialogs, but I get the feeling that most people just skipped out on reading the game’s description which states that dialog can be skipped. What’s the alternative, though? I might have been able to create a dedicated slide from the menu that states the controls, but I felt most people would have skipped that too.

All in all, as far as the dialog was concerned, I think I was damned that I did, and damned if I hadn’t. I’m not really blaming anyone about it, though, because, I’m pretty sure I may have done the exact same thing myself.

Things I Would Improve In Hindsight

As I said above, I would remove a good majority of the “…” from the dialog. Those eat up quite a bit of time, admittedly. Also, I would have spent a little more time adjusting where I cut off some of the dialog. There are some areas I cut up the dialog WAY too much, leaving maybe two or three words for a line.

Other than the dialog… giving some form of clues to the various level puzzles could have used some work. While I felt the puzzles in the first couple levels were easy enough to intuit, there were some that, perhaps, were only possible to figure out by stumbling onto the solution. There’s one puzzle in which there’s a pressure plate that needs steam to trigger, but the pressure plate is located off screen. The player would only ever be able to see that pressure plate AFTER having solved the puzzle.

What I should have done is made a few “decorations” that directly relate to the puzzle solution. I’ve heard other developers talk about how they sometimes forget that their puzzles seem so simple to them because they’re the ones that made the puzzle, but to regular players the solution may not be so obvious. Some wall decorations like, maybe an open eye if a fire is supposed to be lit and a closed eye for an unlit fire. Maybe a symbol indicating a pressure plate when one is nearby. Let the player intuit the meaning of the symbols and that might help them figure out the more complex puzzles.

Lastly… I’m not totally sure that this is something that needs to be fixed, but every level has a “secret win” door. When I originally put them in, I thought it would be funny if it were possible for the player to “win” the game on every level. That said… I wonder if that might have been over kill. Looking back, it’s totally possible a player might stumble on one of these “win” doors by total happenstance and think they truely finished the game.

Another issue with these “secret win” doors is, they all have the same “win” picture, so, there isn’t truely a way for the player to know the door was actually a secret. If I were to choose NOT to remove the “secret win” doors, then perhaps giving each of them a unique ending image… give players a reason to go back and find them all.

To make sure I don’t forget… I wanted to thank Tac0manguy for playing Magelusion on his Twitch stream during the rating period. It’s always fun watching others play my games, and watching him play did help me see where I could have done better. It was very much appreciated! He’s a really cool streamer, so, if you’re into watching people streaming game play, you can’t go wrong with Tac0manguy!!

At the moment, I’m just waiting for the next Jam that catches my eye. I saw at least two that I really would have been interested in, but they were right on top of this one I already finished, so I didn’t feel I had the energy to start another jam right away, but I’m keeping an eye out now, so, we’ll see!

As my favorite game engine, at the moment, is the Godot Game Engine I’m thinking my next jam will be the upcoming Godot Wild Jam, which they tend to do evey month. I participated in the Godot Wild Jam #21 a few months back, entering my game, E-Motional Escape, and it was a fun jam, so I’d like to give that another go!

Another thing I’m going to be playing with is 3D! Most of my games are 2D because I can usually scratch together something that looks passible with my horrible artistic skills, but 3D is a different beast, so I’ve avoided it for quite some time. At the moment, though, I’m giving 3D a chance by playing around with other peoples assets… To that end, I’m using 3D assets that have been made freely available by Kenney! He (or, perhaps, “they”? I’m not actually sure, and I apologize for that) has a LOT of wonderful graphic AND sound assets he’s made available, so, it was a great place to start.

I’m not making anything serious. Just experimenting with 3D to see what I can do. If I figure some things out, maybe I’ll try something 3D in an upcoming Jam. We shall see!